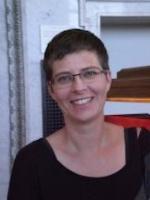 Doris Leibetseder is a postdoctoral scholar of the Beatrice Bain Research Group in the Gender and Women’s Studies Department at University of California, Berkeley since 2013/14, and an IAS-STS research fellow since October 2014. Her research focuses on a queer-feminist ethics dealing with assisted reproductive technologies and transgender, intersex and dis/ability issues. She is/was also an external lecturer at the University of Vienna, University of Graz and University Klagenfurt. From 2011-2013 she was an assistant at the Centre for Women’s and Gender Studies at the Alpen-Adria Universität Klagenfurt, Austria, and taught courses in Gender Studies/Queer Theory. Previously, she was OeAD-Lecturer for two years in the German Department of Durham University, UK. She completed her doctorate in Philosophy with distinction at the University of Vienna in 2008. For her doctoral studies she participated in the PEI (Independent Studies Program) “Technologies of Gender” at MACBA (Museum for Contemporary Art Barcelona). During her MA-studies in Philosophy she was a visiting student at Goldsmiths, University of London and at the Universitat de Barcelona.
Before her studies in Philosophy she completed her diploma as a radiographer at the medical-technical academy at the general hospital in Linz, and worked part-time as a radiographer during her studies.

I create a new dis/ability queer and trans feminist ethics, which is situated in the field of STS, Philosophy, Gender Studies and Critical Theory, and based on issues of biological reproduction with examples from transgender, intersex and dis/abled people.

I look at Assisted Reproductive (Genetic) Technologies (AR(G)T) and how they raise challenges for transgender, intersex and dis/abled people. My focus lies on the ways in which these technologies confront transgender, intersex and dis/abled people with normative expectations concerning their biological sex, gender, sexuality, kinship and their right to procreate.

-What principles are now relevant for reproductive justice in the wake of a paradigmatic shift, which conceptualizes the biological sex as constructed, and new bio-technological developments?

-What new considerations arise for a dis/ability queer and trans feminist ethics dealing with AR(G)T and these intra-actions?

Following on from my 2014/15 stay I will continue for another year as an IAS-STS research fellow. I strongly recommend the workspace, which has a lovely view, for writing and focusing on your subject, the libraries and the intellectual exchange with other fellows and members of the institute is very productive. Do not miss the annual highlight, the STS conference, not only for networking and the presentations, but also for the wonderful locations! The beautiful city of Graz is another asset for everyone who loves living in a bigger town, but also being close to nature (vineyards, mountains, etc.).