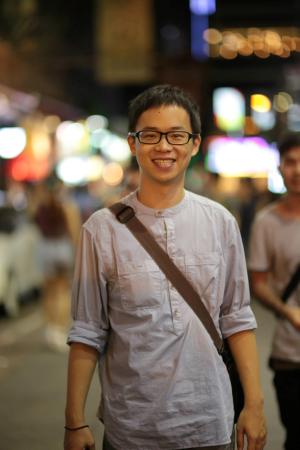 Ross Cheung from Hong Kong, currently a PhD Candidate at Nanyang Technological University in Singapore. He received the Erasmus Mundus Master in Global Studies from University of Vienna, University of Macquarie, and University of Leipzig. He first started his career in corporate financing and then served The Chinese University of Hong Kong (CUHK), Asia-Europe Foundation (ASEF), and Asian Institute of Technology (AIT). Besides, he volunteered at the Beijing Olympic Games, provided a tour in Shanghai World Expo, and conducted a fieldwork in the Expo 2020 Dubai. His current research interests are: Science, Technology, Society (STS), Mega-events, Socio-technical imaginaries, the future, Nationalism, Hong Kong.

Project at IAS-STS: Sociotechnical and future imaginaries in the Expo 2020 Dubai and the Museum of the future

The Expo 2020 Dubai, themed “Connecting Minds, Creating the Future” features three areas, namely Opportunity, Mobility and Sustainability, with one of the objectives being to achieve the Dubai Vision 2021 and the United Nations 2030 Agenda for Sustainable Development. Although Dubai won the bidding in 2013, due to the global pandemic, it was deferred for one year. This research sees promoting national identity as a diplomatic campaign and publicising technology of its own country in the World Expo is another representation of ‘sociotechnical imaginaries’ (Jasanoff & Kim, 2015) and how the ‘Future’ is as ‘pre-given’, promised, and possible statements (Hubbert, 2017). With an average of 15,000 steps per day, I collected about 6,000 photos, 6 hours videos, and 21 interviews during my fieldwork from 21 February to 9 April 2022 in Dubai, the United Arab Emirates. As a future city, there are a couple of sights to observe the future technologies and their imaginaries in Dubai. In the Vision Pavilion ends with a quote from HH Sheikh Mohammed: ‘This is only the beginning of the story’ which his wisdom will guide the future. Dubai is a city in the UAE, founded in 1971, is a federation of seven Emirates. Another example is the newly built Museum of the Future, a female tour guide, claimed that she is from the year 2071 and let the visitors role-play to land in space. Dubai in 2071, the centennial of the country, is projected with lots of high-rise buildings, high-speed transportation tools, and robots.